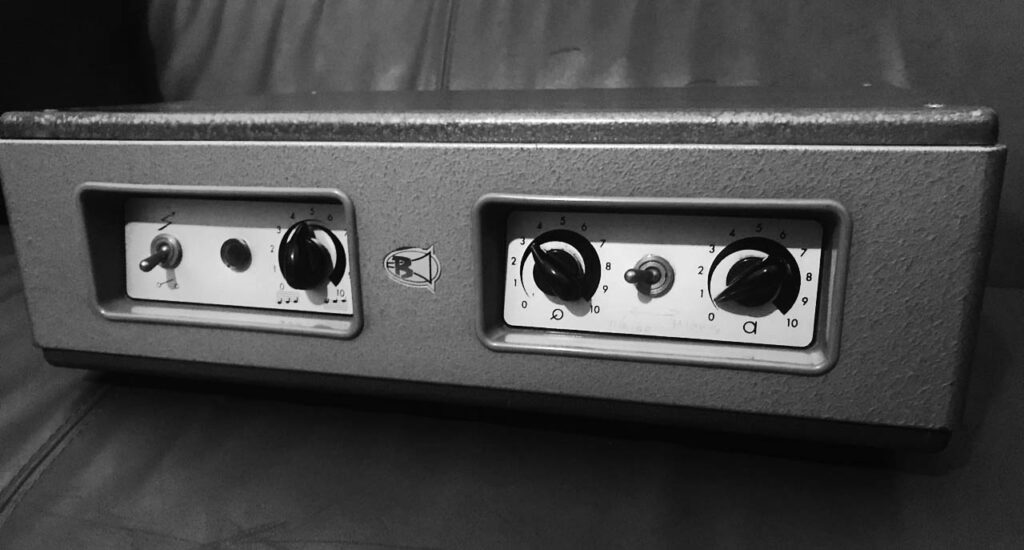 Searching through a used amps website I found this Bouyer ST10 PA amp at a great price. These were made in France during ’62 to ’71. They are equipped with an EF86 and a 12AX7 in the preamp section, single 6L6GC in the power amp and an EZ81 rectifier. Sure enough, they make great candidates for a powerful single ended guitar amp project. I modified and used the amp in it’s original bulky chassis but after a while I decided to rebuild it into a compact head amp.

If you have no metal working skills like me, making an amp chassis from scratch is next to impossible. But I remembered seeing some people building amp circuits into cake pans. The so called “cake pan amps”. Cruising through specialised cooking store websites 🙂 I found a dead cheap aluminum bake pan just perfectly sized to become a house for tubes, transformers and the like. Even the metal panels of the Bouyer fitted just right on the pan’s sides.

After some measuring I fitted the transformers and drilled the holes for the potentiometers, switches etc.

The circuit is quite simple but still versatile: for the first gain stage you can switch between a clean 12AX7( one half) or a higher gain EF86 pentode. Then the signal goes to the other 12AX7 half and finally to the 6L6 which is cathode biased at around 15 watts. I also added a switch that lets you add the cathode bypass capacitor for a louder-fatter sound or remove it for more controllable volume. The three pots are for preamp gain, tone and master volume. Finally, I changed the rectification to solid state to up the voltages and not have to worry about replacing a rectifier tube along the way.

The third 9-pin tube socket is for a tube I had salvaged from an old radio and was itching to use. It has no practical use but is a nice little gimmick. It is an EM84 magic eye tube which lights up according to the signal level! It was used in old radios etc as a VU meter.

The wooden amp head was built out of some scrap plywood and painted(quite poorly) with thinned acrylic paints. I paired the amp with an Alnico P12N speaker in a compact cabinet built the same way. The whole thing sounds great and has quite some power for it’s single ended nature. Here’s a small demo below, with the magic eye tube in action!