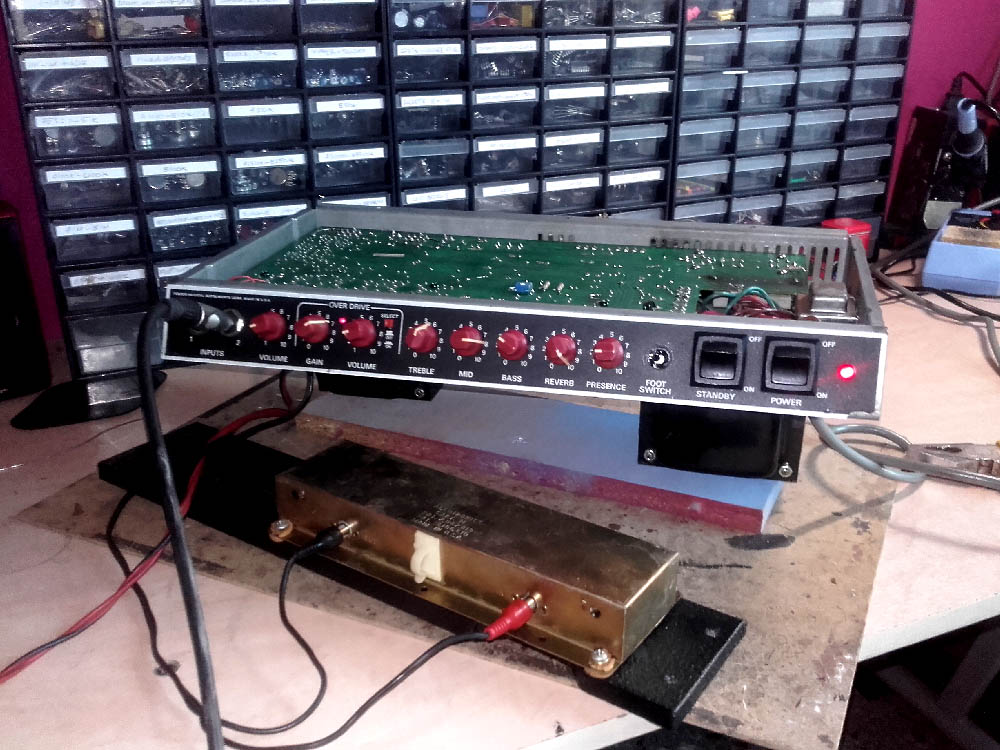 A friend brought in his Fender Super 60 head for repair. This is is a late 80’s early 90’s model with 2 6l6s at more or less 60 watts. He had opened the chassis previously, changing some caps and resistors. The obvious issues were low volume, compressed – distorted sound, static noise and oscillation in the overdrive channel.

Apart from the sonic problems, the pcb was in really bad shape whith burned spots and failing copper traces. A tech has been inside this amp before and had repaired some of them. A couple jacks were also in bad shape. The owner didn’t care for the footswitch jack so I just replaced the fx loop send with a metal one. Then I replaced some suspicious looking resistors and capacitors. Trying it again, there was no static or oscillation but still really low volume. A common issue with these amps is the channel switching which is done by ldrs and some people have solved the problem by replacing them. Here this was not the case though: sending the preamp signal to another power amp the volume was fine. Sending another preamp to the Super 60 power amp though the sound was still weak and compressed, meaning the problem was in the power amp section. We tried a new set of 6l6s, added an adjustable bias pot and rebiased the amp but that still didn’t solve it. All clues pointed that there was an issue with the output transformer which is the second most expensive part to replace. Fortunately, that was not the case after all..

The culprit was the 2ohm tap’s connection on the pcb. According to the schematic the 2 ohm tap is not used in this amp still though the white wire is connected to the pcb with a crimp connector. When reconnecting the crimp connectors I was following the layout as I found it when I first opened the chassis and that was the mistake. In the board there are two slots labelled “WHT” and the owner had used the wrong one, which placed the 2ohm in parallel with the 8ohm tap. The correct slot was CP127 which essentially connects to nothing. After correcting the mistake the amp played nice and loud as it should. The amp was rebiased at a comfortable 70% and it was ready to go!